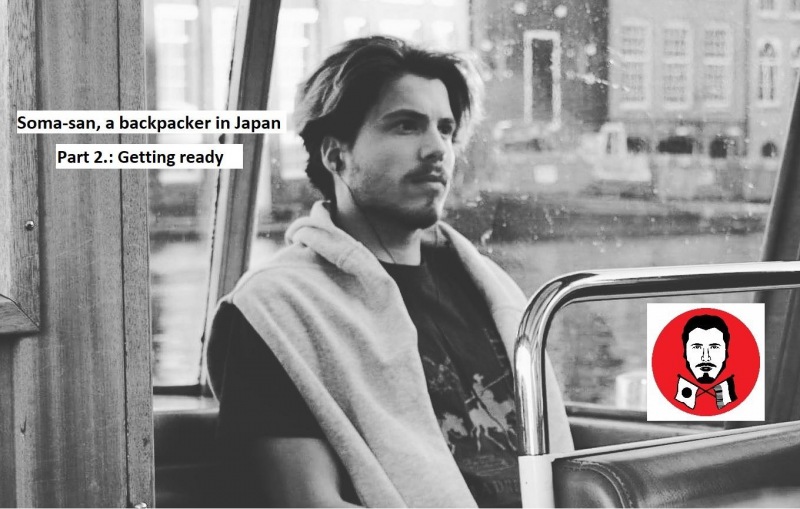 In the previous Part, we met our man Soma, who told us about how he got involved with the Japanese culture, and when he decided that he absolutely needs to visit Japan. In this Part we will follow the development of the itinerary and the details of his preparation. (YouTube video attached.)

Kakehashi: What was your concept when you started to plan your trip?

Soma: I have mentioned it before that originally I planned my trip for the period between August 1 and 31 of 2019. But after the spur of the moment purchase of the cheaper ticket in May, I already knew, that I will leave much earlier, on May 6, and I will only return home on September 5. This was the total of 62 days but discounting the loss of time due to travelling through two time zones, as well as the 15 hours loss due to connecting flights, the actual time spent with travelling in Japan fell between July 7 ad September 3. This means 59 days.

Besides the dates of air travel, there were 4 dates for which I had fixed plans and locations. These were the following:

2.      The commemoration of the anniversary of the nuclear attack in Hiroshima (on August 6)

3.      The Awa Odori in Tokushima: a summer festival with lost of music and dancing (on August 15)

4.      The Daimonji in Kyoto: a summer festival which concludes the All Souls’ Day with a festive bonfire (August 16)

These were the milestones that I set and used to create my travel plan by using the dates as markers, and taking feasibility in to consideration as the primary factor.

Kakehashi: What steps did you follow? Where and from whom did you collect the necessary information?

Soma: There were two books – the NatGeo and the With open eyes – which I used to look up and select the main attractions. Among the information were the major or most important cities, the main attractions, the holidays, the cuisine etc. It was pure luck that the information listed in both books matched almost 100%. Besides this – as I mentioned it in my previous blog entry – I watched every and all TV programs, films, vlogs and blogs, YouTube video which were about Japan. I was interested in both personal and official tourism contents.

It is very important to mention, that I used various Facebook groups for referrals, help,  advices for not only planning my trip but also with technical questions. This is how Miriam Tilli found me who is the owner and maker of the https://traveloninja.com website. She offered her full support and help. Based on her suggestions and recommendations I reduced my original plans by half. She suggested that I should have less cities to visit but by doing so, I would be able to visit all of them and I would not need to rush at all. The goal was that the trip should be enjoyable to its maximum! By the way, Miriam was in contact with me during my entire trip in Japan, to make sure that if I needed help she could. I owe her a lot!

Kakehashi: what aspect were important when you were planning your trip?

Soma: I wanted to make my trip varied in any and every way. I did not want to run the same rounds which average tourist do. Besides the main attractions I was interested in the hidden treasures too. Let me use an illustrative example: If I wanted to visit and see every temple and sanctuary in Kyoto, calculating with 10 location per day, I could have not finish it within a year. I did not want to be the average tourist with a camera. What I wanted was to visit and see less, but to really live those moments.

In my itinerary, I had planned museums, temples, sanctuaries, and at the same time, I planned for hiking, forests, wondering around the city and venturing too. Two months are long time. Especially alone. It is very hard and difficult to keep up the motivation and inspiration continuously, especially with a 20 kg pack on your back, and walking 50 kms per day. Therefore, I planned for “rewards days” in my itinerary. It could mean things like going to the beach at the Japanese inland sea in Naruto, or doing nothing for a day in Fukuoka, or even getting a little bit buzzed in Tokyo on the night before departure.

I have already mentioned feasibility before. This meant that when I planned for hitchhiking for a 600 km trip between Fukuoka and Tokushima, then I planned it for 2 days just to be realistic. Hitchhiking is not a very exact thing, especially it is not teleporting. By the way, the afore mentioned 600 km trip took 3 days because the first day there was a huge traffic jam on the highway due to the end of the Obon festivities, and the second day the 200 km/hour “Krosa” typhoon caused me to stay in a car stop.

Kakehashi: How did you exactly prepare mentally and physically for this long trip?

Soma: It is an important question. There is a very good saying which goes something like this:
“Hope for the best and prepare for the worst.” Being alone, walking several tens of kilometers a day, in rain or in 40 Celsius degree, in a large city or in the middle of nowhere. Out of stock of food and water, without having any opportunity to buy something. These are all such situations and circumstances which I had to train myself consciously. And later it proved that I was right, as I had experienced all of them.

Because of my upbringing, my college and work life, I have always lived a healthy and sporty lifestyle. But for this trip, I created a special training plan. After I purchased my ticket, I packed my backpack with books and water bottles, and when I went to school or to work, I carried that so I can get used to carrying the extra weight. Of course it still did not compare to when you had it in your back every day all day while walking the kilometers.

I doubled the time and quantity of my physical exercise. I included lots of cardio exercise to make me capable to handle. Concretely it meant that during the last 4 weeks prior to my departure, every week I completed the Iron-man program (swimming 4 km, bicycling 180 km, and running 40 km). Because of my limited financial capabilities and that I did not plan to gain weight while touring Japan, I planned for starving too, and included a 4 week long diet in my plan. This meant, that I only ate ONCE a day. I know that it is not healthy but it helped to go beyond my comfort zone.

I was not worried about other conditions, such as mental fitness. I knew that there will be difficult moments, hard times, but basically I am OK to be alone. I looked at it as let us see if I can handle it. The probe for the pudding is eating …

Soma: The following part might be disruptive for the Ladies (rest assure, my mother is over with it and she survived)Because from the very first moment it was planned to be a backpacking trip with hitchhiking, I did not want to take my garderobe to travel along. I knew that whatever I will take with me, it must be useful, and necessary. I was not afraid. Documents, money, tent, sleeping bag, polyfoam, mobile phone with charger, toothbrush and toothpaste, some medicine, knife and of course clothes.

And we got to the very important question. What and how many clothing? A little and comfortable! Plus an additional shirt just for Hiroshima. Besides this I ONLY had the TOTAL of one pair of jeans, a sweatshirt, a pair of shorts, 5 T-shirts, 5 pairs of socks, and 5 pairs of underwear.  I would not say that it was a lot for two months, But I thought I will do laundry there. Simply, there was no more room, and the more I take the heavier my backpack gets.

For those who do not know Japan, especially not the summer conditions, we need to mention, that the weather is very unpleasant there. Maybe it is only 30 degree and not 40, but humidity is 90%. You sweat in vain, you are not able to cool yourself, which is even worse, trust me! So I got started in the consciousness of this. I even left the rain canopy at home because it would have taken lots of space in my backpack (which I regretted very much at the end …) Kakehashi: So all together how much time did it take to plan and prepare, and when did you buy your ticket? What was your estimated cost?

Soma: It is difficult to answer, as I mentioned before, I had been planning for this for years. By the time I purchased my ticket, I knew almost everything about all the cities and the country including the details too. I bought my ticket in May, and from then on, I only had to finalize my itinerary. If you would start from zero, and you would like to accomplish a trip like this, I would say, that first you need to learn the culture, the customs of the destination country and only start planning afterwards. If someone gets involved at a great extent, and spends time with it regularly, then I would say, it can be done in a year.

In my previous blog superficially, I mentioned the money as one of the factors as an answer to the “why I wanted to travel on a low budget? question. I know that the major expenses will be the airfare and other travelling costs, the food and passes. I had been looking at airfare and ticket costs and I had to realize that if I had travelled a year before, I could have saved HUF 50,000. Airfare to Japan got more expensive as we got closer to the 2020 Summer Olympics. And the Japanese Yen exchange rate was also better as before so it added up to my HUF 50,000. I am witty but not stupid. So I had to buy insurance as well. I also had to buy some important and necessary thing and missing equipment such as a summer sleeping bag, a hiking backpack, solar charger and a selfie stick.

All in all, it is almost USD 2000, but it is not a large sum if you save up for it over the years and if you are visiting such a unique place!

If you come back and read my next blog about my first few days and experiences in Japan, you can decide if it was worth it!

All rights reserved.
Copyright notice in connection with the text, image, sound and video materials of the website.